My current crop of Beginning Drawing students at Mizzou are doing some great work. Below are just a few of their Interior Space drawings – these works are their first attempts at realizing accurate perspective and accumulation of value. I think this group of (mostly) non Art Majors is doing nicely. 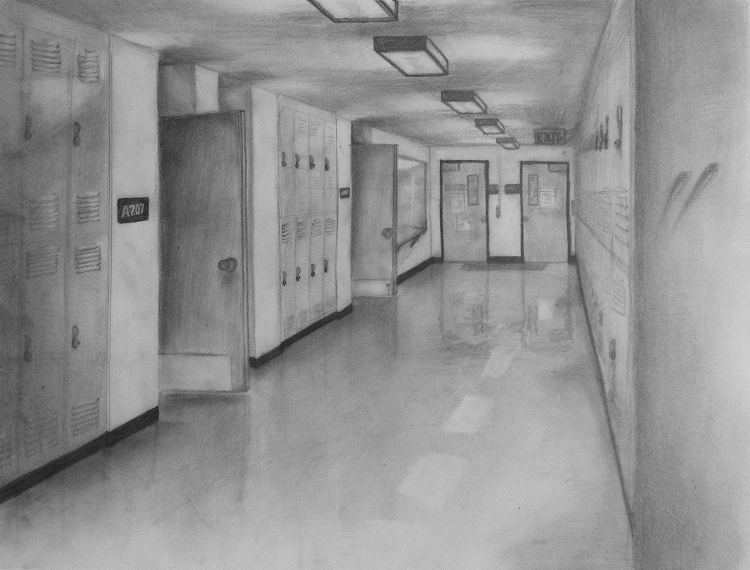 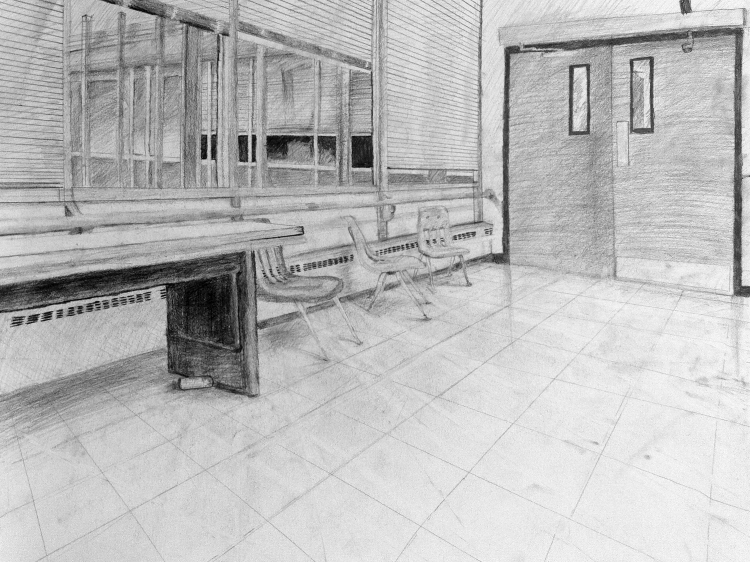 It’s shaping up to be a great semester!

Back in 2001 I was awarded a Fellowship Residency at Ox-Bow in Michigan (you can read more about that transformative time here). This was a time before browsing the internet by phone from basically anywhere was even possible; hell, I didn’t even have cell coverage there. There was only one internet connection accessible at Ox-Bow and that was via dial-up.

In the Inn (before renovations that happened back in 2004 or 05), there was a small desk tucked into a corner where people would use the phone to call home or connect their brick-like laptop to the web for a few minutes. I had quite a few late night phone chats there with my then-girlfriend/now-wife after which I’d use the phone jack to log into my email for a sending/receiving session.

One evening I walked into the Inn to see Chris Ware sitting at the desk, talking on the phone, and making a small drawing on a scrap of paper. Mr Ware, a famed-though-awkward comic book artist who had created the fantastic Acme Novelty Library series and the graphic novel Jimmy Corrigan, the Smartest Kid on Earth (Among many works. You should look at them – they’re quite profound and beautifully made) was at Ox-Bow to give a talk. And there he was: silent, hunched, and seemingly distracted from his phone call. His pen moved gently, pensively. His paper skittered over the pitted wooden desktop.

We – those who had to use that desk and that phone because no other forms of communication with the outside world we available to us – had been used to sketching absentmindedly while sitting there. I had drawn many a cartoon self portrait during that summer. Often our drawings would join together, becoming layered time capsules consisting of blue and black ink. Mr Ware’s sketch was added to the desk drawer to be subsumed into the mass of other drawings.

Some time later – a day, a week – I found myself rooting through the drawer for a paper upon which to put my jottings, and there was Chris Ware’s drawing. On a 4 by 3 inch scrap of Ox-Bow map (verso) a weary figure, perhaps bemused but certainly full of existential angst (a stylized self-portrait of the artist?), sat before an anachronistic rotary phone. The expression of the man, the drawing’s line work, and the overall feeling of the piece are all quintessential Ware.

And so, here it is for your enjoyment:

How do you mark that time? In stories that bear witness to the hard things as well as the sweet moments? With lines indicating growth? In snapshots of little girls becoming sisters or ecstatic family gatherings?

I think I’ve been more eloquent in the past. Today I’m just thankful and blessed. I’m not the best dad, but I’ve worked hard at it. And I think being a dad to two amazingly epic daughters has made me better – more – than I thought I could be. In all of this I’ve gotten to see my wife gloriously work divinely-appointed magic as a planner-of-life, kisser-of-wet-cheeks, and encourager-of-all.

How do I mark this time? I think I’ll go left-of-center:

Click on the image to see these up close.

These are four pieces of “Chinese money” that my daughters have payed with a LOT in the last year. They are, obviously, not real currency. Instead, they are three wet-wipes that came from various hotel rooms or restaurants we visited while in China. And that one covered in duct tape? That’s a strawberry Nutri-grain bar in there; it’s seen better days.

There’s something about their play money that’s joyous and fun. We’ve worked to keep the memory of our time in China alive,  as well as the anticipation that we’ll return again soon. Little indicators of that hope are all over our lives, even seemingly-insignificant ones like these playthings.

So here’s hoping for many, many more years to think back on what has been and look forward to what will be. What a good year to be a family of four.

PS: We’re celebrating over at the Etsy shop with super-discounted artworks – maybe you’ll find something you like?

In just four more days – February 18 – we’ll be celebrating the year anniversary of becoming a family of four! It’s hard to believe that on this day a year ago we were walking the streets of Beijing and taking in the sights and sounds of China! The time has really flown and so much has happened! So many people helped us get to that adoption day and then continued to support us over the last year. It’s truly been a year of serious joy and strange challenges.

To mark this event with some art I decided to have a Studio Sale – and everything is going to be priced in multiples of 18 (February 18, multiples of 18… see what I did there?)

Anyway, stop over to the Etsy Shop to see what’s new over there. All the work will go back up to “normal” prices next month, so get some glorious imagery while you can!

Below are a few of the pieces you could be hanging in your place for next to nothing – click them to see their Etsy listing. 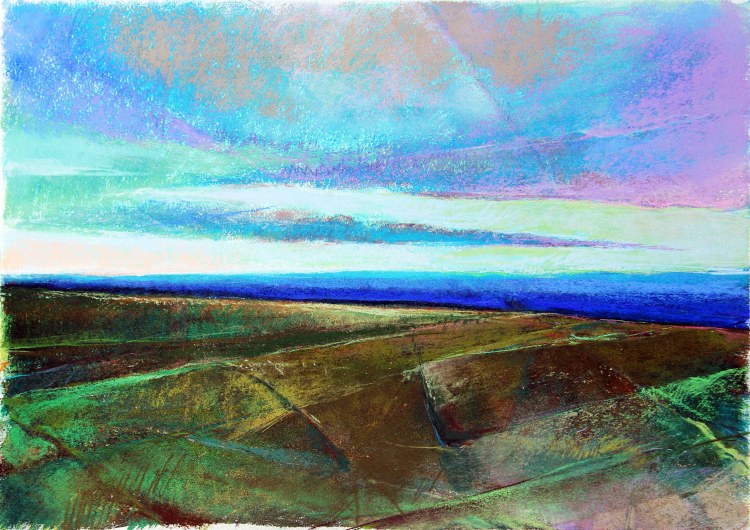 A little more than two decades ago my cousin Chris and I began to take long drives northward from our home in central New York State. We almost never went south. There were many adventures on those forays; our families knew what it meant when we said we were going “up North.”

Many hours of conversation accompanied the drives, as did many hours of silence or reverie to the music we loved then. Over time the purpose of these trips showed itself in clearer and clearer form: the road was for a kind of tandem contemplation of what had been before us, what lay beyond us, and what was permeating our existence. We drove north to explore. Though moving through space we were motionless and silent in our souls. We found transformation and dreams along the road.

One of our favorite routes is an iconic stretch of highway that runs nearly 250 miles through the interior of New York State. State Route 3 begins (or ends, depending on your perspective) near Fair Haven State Park, practically in sight of the southeastern end of Lake Ontario. After a short jaunt eastward, Route 3 turns emphatically north and holds the eastern shore of Ontario for 60 miles. The road’s great northeasterly meander across the deep woods, lakes and mountains of upstate New York commences in historic Sacket’s Harbor, soon passing through Watertown and Carthage, then running just to the south of the Fort Drum Military Reservation. Roughly 70 miles from the streets of Sacket’s Harbor, Route 3 enters the great Adirondack Park.

Chris adjusting his old Pentax SLR during a photo stop, 2003 or so.

Just near this entrance to the Adirondack Park sits the hamlet of Star Lake and its eponymous body of water. The section of Route 3 that runs between Star Lake and Tupper Lake is majestic and ephemeral to drive at night. Tupper Lake is a crossroad of sorts, situated as it is along Route 3 running east/west and other routes running north/south. Though it is often a center of activity in daylight, especially in the summer months, Tupper Lake in the twilight – or at midnight – is glorious. The ancient, rounded-off Adirondack Mountains seem to circle in and provide a black frame for the jeweled vault of the sky. Chris and I have seen this many times.

This effect – a dark horizon circumscribing the grandness of the Milky Way, or Polaris, or Cassiopeia – is perhaps the reason why we started calling Route 3 “The Star Road.” It could have been the presence of Star Lake near the entrance to the Park. It might also be that there are, in fact, two real Star Roads off of Route 11; one between the towns of Malone and Ellenburg along a stretch of Route 190 and the other very close the border with Canada on County Road 17. We’ve traveled both of those roads and they could have influenced us. 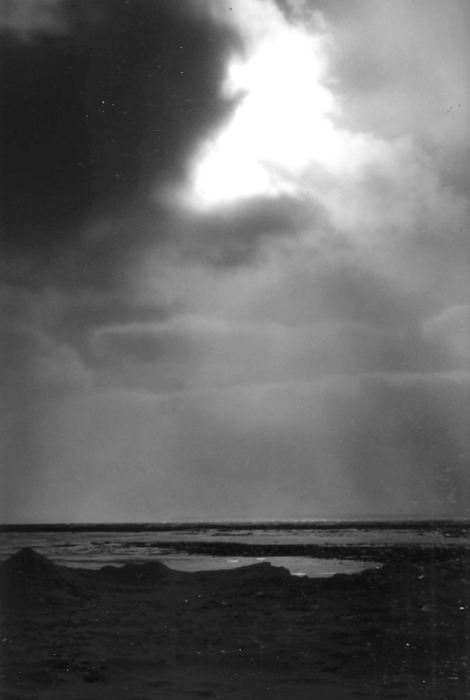 Whatever the reasons, we spent many a dark, snowy night driving along Route 3, or glimpsing northern lights amidst the summer stars beyond Saranac Lake. The ending – for us – was to either come into Plattsburgh then strike a new route home, or to break off The Star Road early and head north toward Malone or south toward Lake Placid and Mt Marcy. There were many nights we merely ran along Route 3 for a short distance beside Lake Ontario, then slipped onto Route 12E from Watertown up to Cape Vincent. There, at the inflow of the St Lawrence River, we’d creep out of Cape Vincent toward Tibbetts Point to sit beneath the lighthouse with all of Ontario spread out westward before us.

I loved those drives and talks and silences. I loved listening to the Chateau D’Isaster Tapes while cruising along, angling across the brow of New York State, and imagining what the future might hold. In some ways these trips are behind us. We have families, homes, and other responsibilities. But I know we both still feel the pull of those hills and lakes and forests. I’m sure we’ll aim headlights northward sometime soon, and find ourselves in dream-driving together once again.

A section of one of the old, fold-able NYS maps we used to use