Twenty-five years ago today I was a third-grader in Grove City, PA. It was a special day – my class would get to watch the Shuttle launch carrying Christa McAuliffe, a grade school teacher, to space. 73 seconds into the flight – right after the “go at throttle up” confirmation from commander Dick Scobee, the Challenger exploded.

You can see the launch and aftermath as it appeared live on CNN here. 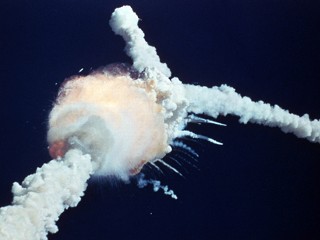 Regardless of what you think about President Reagan, politics, or government in general, the speech crafted after the disaster and delivered by Reagan was amazing and has been a kind of lodestone for me, a testament to attempting great things, to loving this wonderful universe, and respecting the men and women who explore its secrets at all levels. You can see the speech here.

Perhaps the genius of the speech was its use of John Gillespie Magee, Jr’s poem, High Flight as its coda: “We shall never forget them nor the last time we saw them, as they prepared for their mission and waved good-bye and ‘slipped the surly bonds of Earth to touch the face of God’.”

It still gives me a lump in my throat.

I can’t really explain to you what this event meant for some people of my generation. Many people I’ve talked to who are a generation older than me are a little taken back that it matters to so many of us. During one of my undergraduate classes back in 2000 or so, the professor – who’d lived through Civil Rights and Woodstock and Vietnam – reamed us kids out for caring about a failure of the “military industrial complex” and the loss of merely seven lives. He thought we’d romanticized it and weren’t realistic, that we didn’t have proper perspective. We hadn’t lived through years of seeing the names of the dead in South East Asia scrolling over TV screens every day. If we had, we’d know what a waste NASA was and how appropriate it was that the dream was shattered. Maybe he was right in a way, but not ultimately.

That’s because, unfortunately, we’ve had that chance he spoke of: we’ve been in this current wartime for many years. We’ve seen the lists of the dead. And we’ve had another Shuttle disaster. In my mind there’s a dramatically huge difference between the two. One is the result of governments and power brokers and militants and corporations and terrorists and yea-sayers creating – nay, manufacturing through manipulation – a war. The other is the result of a genuine human attempt to know more about our universe, to care for our world, to craft unity in the midst of our diversity, to develop important technologies to help us help ourselves and each other. I weep over the lives of men and women who die in foreign lands for governments who use them as pawns in their global power plays. But those who die in the attempt to learn more, in the fierce determination to go farther and see more of what we are and where we live – these fallen lend their force of life to all of us and it is not wasted. If the strong have to die, I’d rather they die in the service of all humankind, not in support of fallacies, tribal rivalries, illegal land-grabs, and inane prejudices.

That’s why the Challenger Disaster is important to me. It makes me proud of humanity. It highlights the best of us. But these wars and attacks and shootings and bombings – like the recent gun attack in Arizona and bombing in Moscow – display only the worst. Hubris, destruction, the desire to dominate others. These things are wrong.

So yes, I am romanticizing the Challenger shuttle and her crew because they represent a lot of what is right with humanity.