“In places like universities, where everyone talks too rationally, it is necessary for a kind of enchanter to appear.” – Beuys

“Theory can only describe; it can never justify.” – Ballou 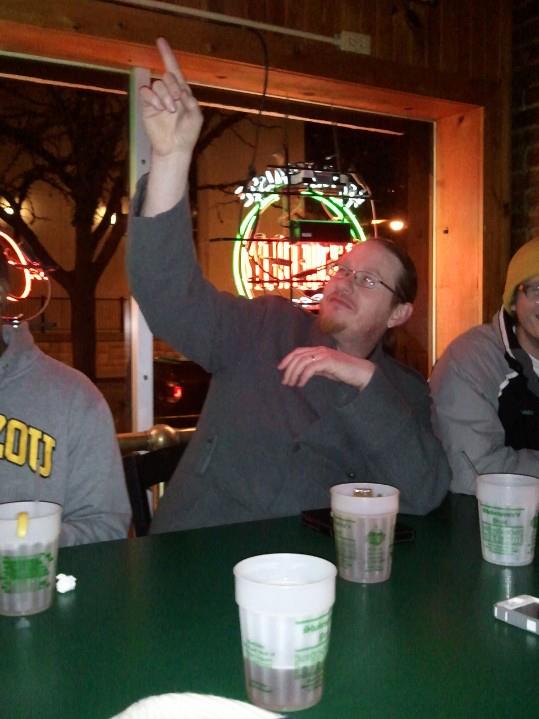 Above: Me with some grads after one of our early sessions, Spring 2012

This semester I got to dig deep with a group of graduate students here at Mizzou. In the discussion-based course I presented a series of texts – grouped into several general themes – and used them to attempt to open up the grads’ approach to thinking about, making, and viewing art. In our reading, discussion, and reflective writing, we took on some of the alternative histories/literacies that function within the art world. I wanted to use this post to give a general overview of the topics and content we touched on this semester, as well as offer a selection of some of the provocative ideas we read. I do this as a huge thank you to the individuals whose work we sampled; their words were encouraging, challenging, enraging, and powerful. I also wanted to take this opportunity to thank the students who took the journey with me. So here’s to Aron, Bethanie, Charlie, Chris, Danielle, Eric, Greta, Jahner, Jane, Matt, and Ron; none of us could have had the experiences we had without each of us being a part of it. As David Abram (or Bachelard, or Emerson, or Dillard) might say – all things are in relation. 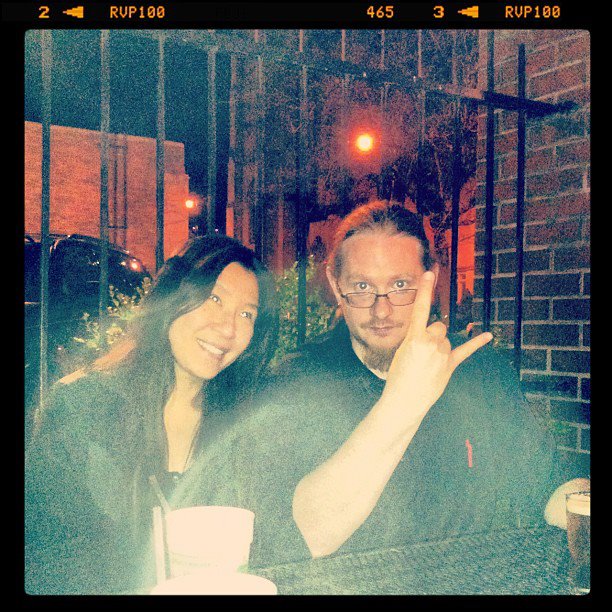 Above: A grad class?

1) We began by discussing some key dichotomies through the easy-to-access survey work of Leonard Shlain. Contrasting ideas such as Image/Word, Nonverbal/Verbal, and Truth/Fiction were explored in a number of texts and films, the latter being most importantly represented by Herzog’s Lessons of Darkness and Reggio’s Koyaanisqatsi.

“Of all the sacred cows allowed to roam unimpeded in our culture, few are as revered as literacy.” – Shlain

2) Tightening our resolution from the expansive binary tensions in our initial overview, our second focus was to look at how the more central ideas and modes of art and aesthetics were defined/redefined and questioned in the first part of the twentieth century. Looking at early pragmatist philosopher/scholars of art and religion like George Santayana and Ananda Coomaraswamy we took the temperature of a certain corner of the institutional establishment in the throes of the Modernism moment.

3) In our next group of readings we found ourselves looking away from socialized and received notions of making meaning and gazed into the huge vault of human biology itself. Using primarily Rudolf Arnheim and Ellen Dissanayake, we discovered that a very profound kind of knowledge precedes the cognitive ideas that may calibrate our understanding of art: the psychology of kinesthesis and developmental biology. We took Dissanayake as a jumping off point to engage with Evolutionary Psychology as it pertains to art, art-making, and meaning. Touching on the work of Denis Dutton (as well as his critics), we explored how biology has calibrated how human beings make meaning and put it to work in the world. Coming back to pragmatism, we saw how Dewey and Kupfer connected aesthetic experiences with moral growth.

“It is important to recognize that in large measure everything we know is ultimately based on our bodily senses: what we see, hear, and touch, in particular.” – Dissanayake

“The work of art symbolizes all the levels of reality that lie between the phenomenon and the idea.” – Arnheim

“We take pleasure in watching an athlete break a record, hearing a soprano in full flight, or reading a philosopher of depth and insight. Human accomplishment is the ultimate spectator sport. Apply as much historical analysis to it as we wish, and we’ll not unlock all its mysteries. The continuous capacity of genius to surpass understanding remains a human constant.” – Dutton

4) Once fully ensconced in the notion that our biology (and the way that biology structured our thinking and making) is key to any real understanding of what art is and does, we looked at the intellectual analysis of artworks. This examination of interpretation – or, as it might be, overinterpretation – was overseen by Arthur C. Danto and Umberto Eco, with a significant dash of Richard Rorty thrown in for good measure.

“Interpretation is in effect the lever with which an object is lifted out of the real world and into the artworld, where it becomes vested in often unexpected raiment. Only in relationship to interpretation is a material object an artwork, which of course does not entail that what is an artwork is relative in any further interesting way.” – Danto

“From a certain point of view everything bears relationships of analogy, contiguity and similarity to everything else.” – Eco

“Reading [artworks] is a matter of reading them in the light of other [artworks], people, obsessions, bits of information, or what have you, and then seeing what happens.” – Rorty 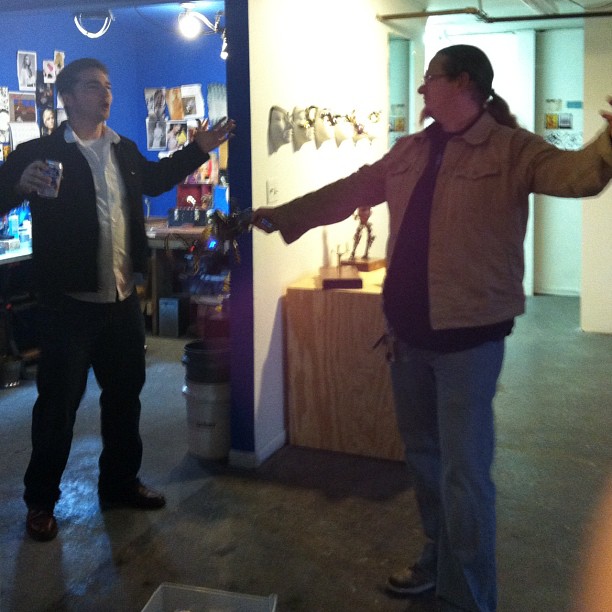 Above: COME AT ME BRO!

5) In some sense our exploration of the hyper-intellectualized/philosophized interpretation of artworks took us from culture into a kind of ritualized, rarified space – albeit a secular one. From there we took a tack back toward culture-making and onward through it toward a more spiritual kind of ritual. We looked first at key texts from the famed philosopher of religion Mircea Eliade. Our perspective was updated to the mid-90s with Suzi Gablik’s The Reenchantment of Art.

“The numinous presents itself as something ‘wholly other’ (ganz andere), something basically and totally different.” – Eliade

“Ritual signifies that something more is going on than meets the eye – something sacred.” – Gablik

6) At this point we began to entertain the implications of the alternative histories/literacies we had explored over the semester. We aimed more directly at poetical understanding, beginning with Emerson as a representative of the American Transcendentalist Movement of the 19th century. From there we allowed Annie Dillard and David Abram to bring us up to the present day – and blow our minds along the way. In this section we spent a good amount of time attempting to understand an intuitive mode of aesthetics as opposed to a rationalist one.

“The life of [humanity] is a self-evolving circle, which, from a ring imperceptibly small, rushes on all sides outwards to new and larger circles, and that without end.” – Emerson

“The feelings that move us – the frights and yearnings that color our days, the flights of fancy that sometimes seize us, the creativity that surges through us – all are born of the encounter and interchange between our life and the wider Life that surrounds us. They are no more ours than they are Earth’s” – David Abram

“I’ve an eyeful of fish-scale and star!” – Dillard 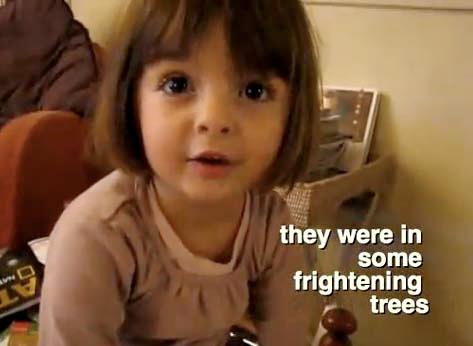 Above: They (the grads) were in some frightening trees (grad school)! Click here for more information…

7) Our final readings of the semester centered on Gaston Bachelard. This master dreamer – a giant of 20th century philosophy who influenced Foucault and Derrida – helped us grasp the constellations that populate our own inner universes. Bachelard gave us – through his inflected intonations of the words of Rilke and Baudelaire (among others) – a sense of how our intuitive manifestations might transcend the “geometrical ontological determinations” that dominate the empiricist, rationalist approach to contemporary art-making.

I want to thank all of the grads for going with me on the journey this semester. Spring 2012 FTW!