The First Taste of my First Homebrew

Wow. I just cracked open the first beer that I brewed, fermented, racked, conditioned, and bottled myself. I have two different IPA varieties going right now, and the Chinook IPA is done and finally ready. Here’s the low down:

Immediately after the pour. Very bright golden red color. Decent carbonation in view – this is something I was worried about. I over-sugared just a tad in the priming stage during bottling just to make sure I’d have some action. The head, as you can see, is light, but the carbonation is active and continuing. I left less than an ounce in the bottle; some gunk had precipitated out, but it was very light.

Here’s a shot a few minutes after the pour: 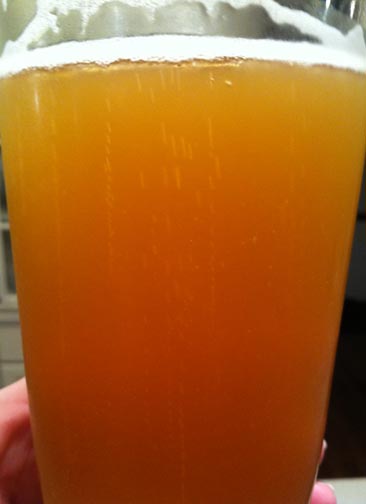 Bubbles shooting up there.

The smell is amazingly fruity and very close to a fresh grapefruit. The taste is very sweet, also grapefruit-like. On my tongue it reminds me even more of a ruby red grapefruit laced with sugar. After the swallow there’s a very light bitterness. I love and have tried dozens of IPAs; this one is very mellow overall. Sweet and tangy in the hops, low bitterness in the aftertaste, with a slightly acidic feel on the back of the tongue in the minute after a pull from the glass. Very citrus to me.

As I write this I’m taking the beer very slowly, letting it sit. The residuals – left over sensations on the tongue and burps, etc – are very pleasant and not at all stinky or turned bitter. Twenty minutes after pour I’ve taken about 8 ounces. There’s still a nice, active, thin head on the beer and good lacing on the glass. Earlier this evening I had a Ranger IPA and what I’m drinking now feels so much better to me. I’m amazed at that fruit taste – nothing harsh about this beer.

An early shot of the gathering head, a few minutes after first pour.

A little data on this brew:

Overall impression: Amazed. Most of the homebrews I’ve had have felt middle to low quality to me. I really tried to be very safe with this brew, though I did add in special grains to tweak the recipe. But with sanitation, timing, and conditioning I tried to overdo it. I wanted to work a couple extra weeks into the process to let it condition in the secondary carboy before bottling since it seems to me that bottling too soon accounts for a lot of the inconsistency of homebrews (but what do I really know?). In any case, I feel like I got it right and I’m really happy with this beer. 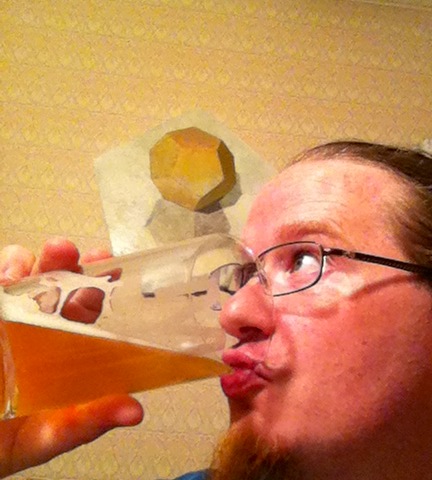