Jeremy Grove is a man who loves family and history. Through some interactions with friends a few years ago he ended up witnessing a Civil War reenactment event. In conversation with the participants he found that he wanted to participate as well. Soon thereafter he joined a Confederate reenactment unit. I asked him if he was a secret Rebel, but he had ancestors who fought on both sides in the war. Jeremy had a great, great, great grandfather who marched for the Confederate States of America with General Shelby’s Iron Brigade, while another was among the first Union soldiers to be buried at Arlington National Cemetery. 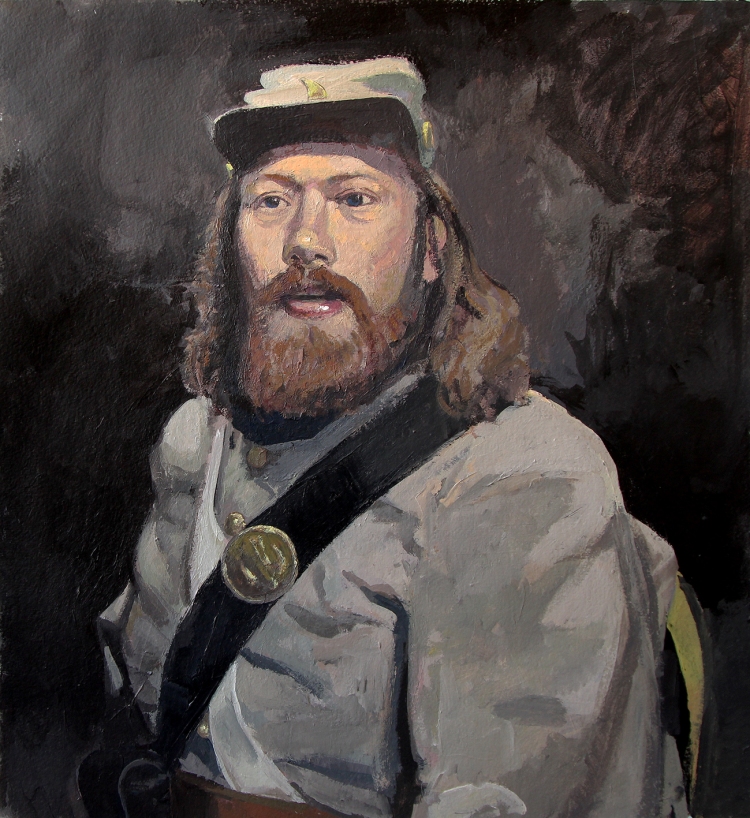 Jeremy on Reenacting for the Confederate Army:

“A good thing to come from my participation in reenactments is that we highlight a time when slavery was an issue. The reality is that human trafficking is still an issue; slavery is still an issue. And if, through my portraying a Confederate soldier, I can have conversations and engage with people – and ultimately raise awareness of the reality that human trafficking is perhaps worse now than it has ever been in history – then I feel that it’s a good way to use history to learn from our past and make a change.”

On the History of War:

“Sobering and horrifying. All wars are wars about resources, nothing more.”

As we dialogued through the evening, our topics ranged from specific events during the Civil War to the idea of state sovereignty, from public history to personal history. Jeremy’s discursive narratives on the battles and movements of governments and armies as they impacted Missouri was amazing. Later on we moved into eastern European folklore, film appreciation, the Large Hadron Collider, faith trajectories, China, Japan, and hardcore table-top gaming. We rounded things out sharing our experiences of the adventure of marriage and the glory of parenting.

Each moment of our talk was charged with intensity and meaning; there were so many quotable, memorable moments. Jeremy’s energy, passion, and desire to live with awareness and thoughtfulness is inspirational. He’s a good man. Thanks for sharing so many grand histories, ideas, and laughs with me, sir!